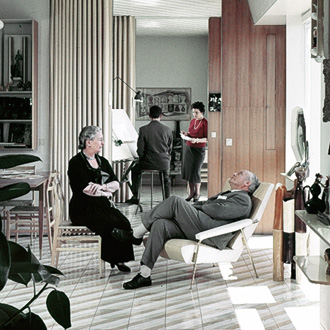 On the occasion of the ICFF, Molteni&C and Dada present “Vivere alla Ponti” [Living Ponti-style]. The event, designed to promote a new collection of furnishings designed by Gio Ponti in the United States, will be staged in two phases: - a presentation of the Gio Ponti collection in the Molteni&C Dada Flagship Store on Greene Street, Manhattan; - an exhibition at New York’s Istituto Italiano di Cultura, “Vivere alla Ponti: Le case abitate da Gio Ponti. Esperimenti di vita domestica e architetture per l’abitare e il lavoro” [Living Ponti-style. Houses inhabited by Gio Ponti. Experiments in domestic life and architecture for living and working]. The exhibition, originally prepared for the 2012 Salone del Mobile by Milan’s Ordine degli Architetti and by Muse, with Molteni&C’s support, presents a collection of furniture and a series of letters, family photographs and videos that testify to the modernity of a key figure of 20th century design. Gio Ponti, architect and designer, founder of “Domus” and “Stile” magazines and of the Compasso d’Oro award, writer and lecturer at the Milan Politecnico, honored with the Médaille d’Or by the French Academy of Architecture. For its U.S. showing, the exhibition is enriched with a section devoted to Ponti’s projects in the United States: Alitalia offices(New York, 1958), Time Life Building Auditorium (New York, 1959), Denver Art Museum, (Denver, 1971), MUSA, travelling exhibition of Italian furniture in the U.S.A. (1950-53), furniture for M. Singer&sons (1950s), furniture and walls organized for Altamira (1953). The preview of the exhibition will be preceded by an encounter with the Director of the Istituto Italiano di Cultura, Riccardo Viale, with the two curators of the exhibition, Francesca Molteni and Franco Raggi, deputy-president of the Milan Ordine degli Architetti, with Massimo Vignelli, designer and founder of Vignelli Associates, and with Marianne Lamonaca, curator and deputy director of the Bard Graduate Center. After Milan, Rome, Venice, Palermo, Brescia, London, Moscow and Paris, New York will now be hosting a collection of furnishings designed by Gio Ponti between 1935 (chair for the first Montecatini Building) and the 1950s (bookcase, bureau, small table, picture frames and rug for Casa Ponti in via Dezza in Milan, 1956-57). An already emblematic collection, produced thanks to an exclusive agreement signed with Ponti’s heirs and with the artistic direction of Cerri&Associati, after lengthy research and study of the prototypes. As Gio Ponti’s nephew, Salvatore Licitra, says, “as Italians and Milanese, we have a duty to make people aware of Ponti’s heritage and to reveal a littleknown archive. There are numerous forgotten works and products to be reedited, which also offer us a chance to understand the man, his work and a crucial moment in Italian architecture and design.” The “Vivere alla Ponti” exhibition thus pays tribute to Gio Ponti’s genius and, through an intimate and at once professional narrative, the vitality of one of the great masters of Italian design. New York’s Istituto Italiano di Cultura Founded in 1961, the Institute of Italian Culture is an official branch of the Italian Government devoted to promoting Italian culture in the United States of America by organizing exhibitions and events and by providing cultural services. Under the aegis of the Ministry for Foreign Affairs, the advisory commission and its staff, the Institute of Italian Culture in New York complies with this commitment by cultivating cultural exchanges between Italy and the United States in different areas of interest, ranging from the arts to the humanities and science. 17 May - 2 June 2013 Molteni&C with the Istituto Italiano di Cultura New York invite you to The World of Gio Ponti A talk on the life, work and influence of Italy’s visionary maestro of Italian design and architecture Istituto Italiano di Cultura 686 Park Avenue, New York Ph. (212) 879-4242 Monday 20 May 6pm to 9pm To celebrate ICFF Molteni&C is pleased to present Vivere alla Ponti An installation of home furnishings designed by Gio Ponti between 1935 and 1958 Molteni&C Dada New York Flagship Store 60 Greene Street Cocktails RSVP rsvp@moltenidada.com