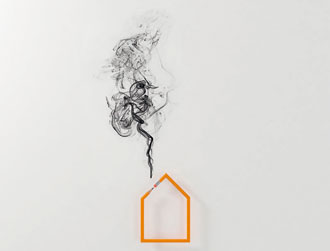 The shape, construction and architectural design or the place where where your heart is? Too simple a question for a complex character. To find out more the appointment is at the Tel Aviv Museum of Art - July 2013 – with the exhibition entitled “The Logical, the Ironic, the Metaphoric & the Absurd”. For Ron Gilad, the little white house with a red roof, a chimney and a fireplace –the icon-installation of his forthcoming major exhibition due to open on 9 June 2013 at the Tel Aviv Museum of Art – will be house and home. The archetypal home, the philosophical idea. A place in which opposites coexist, those that he cheerfully and ironically places together in picture frames and mirrors, lamps and occasional tables, bookcases and beds, cushions and wardrobes. But also in those slender heroic poetical and poignant sculptures that emerge from the walls in sequence, those sketches that emerge from the paper, those rigorous lines like slashes moving in space. Questioning yet never sombre, light yet profound, Gilad circles gracefully and masterfully over these paradoxes– and it couldn’t be otherwise considering his Jewish background and the sentiment of that culture, of those roots. Solidity and fragility, immobility and dynamism, lightness and heaviness, uniqueness and seriality, memory and postmodernism, rationality and the unconscious, rigor and poetry, rigidity and softness, reason and sentiment. He holds it all together, perfectly balanced, without any inconsistency. Gilad is an eclectic and cosmopolitan artist and designer, born and bred in Tel Aviv, a vibrant and eccentric city with the greatest density of Bauhaus in the world, he has always been surrounded by this mood at home, surrounded by those few pieces that he found within his own four walls. “Everything that will be on show in Tel Aviv was produced in Italy, in fact I would say that the exhibition could easily have been entitled Made in Italy”. A sobre and authoritative, but peremptory tribute from someone who has been consacrate Designer of the Year by the 2013 Wallpaper Award. For the man who loves to have long-term commitments, and friendships that tell stories, it is an important accolade for our national industry, which can rely on craftsmanship, skills, technological and advanced manufacturing expertise, districts, a workforce trained in ‘missions impossible’, products of immense technical and formal complexity that nobody else in the world would be able to make. With the most intangible but indispensable of resources: our manufacturing culture and quality. This explains why talents such as Ron Gilad choose Italy and its manufacturers, this is why Italian centres of excellence forge and foster solid relationships and development prospects with designers like him. This is how his relationshp with Molteni, immediately challenging on a conceptual rather than on a technical level, came into being. With the small, oval Pannacotta table – at once delicate and heavy, just like the dessert it takes its name from – the heaviness of the marble and iron became lighter, construction techniques and material treatments were experimented, the essence of communications changed. A similar process happened with the Vetrina 45°- Collezione Grado°, an iconic piece. Here Gilad worked on the geometric rotation of the shelves - from 90° to 45° - on the rounded corners and on the metallic joints. The opening thanks to a small key grafted onto the structural profile creates a surprising result: a transparent solid that invites you to look at what it holds within. Again a shift between what it is and what it seems. Ingenious and astonishing, Gilad shows what is not there, names what is different, looks for the memory of the function in the form and, in so doing, reconfigures both. Maybe this is why, without any fuss, at the age of forty, and with humour and elegance, rigour and poetry, Gilad, along with his Italian industrial partners, has already produced not just objects but genuine classics.