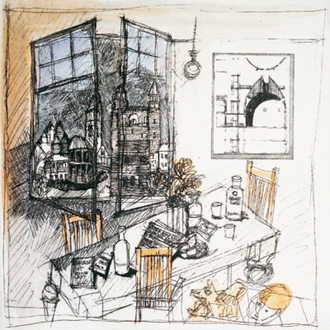 La Tendenza Starting from June 20, Paris will be paying tribute to twenty years of Italian architecture with an exhibition entitled “La Tendenza. Architectures italiennes 1965-1985”. Once again, the Pompidou Centre explores the centrality of a movement – which began in Italy and became international – and of its leading exponents, first and foremost Aldo Rossi. As it did in 1991 with the “Aldo Rossi. Par Aldo Rossi, architecte” exhibition. Thanks to the collection that the Museum has been building over the years, the retrospective presents over 250 drawings, maquettes, photographs, pictures, films and literature on the founding movement of post-war architecture, later to be known as postmodernism. If France commemorates Aldo Rossi, Italy pays him homage with an exhibition that looks back at the architect’s enduring partnership with Gruppo Molteni: an encounter that took place in the early ‘80s, thanks to Aldo Rossi’s close friendship with Luca Meda, the company’s unforgettable art director. In the Molteni&C Dada Flagship Store in Rue des Saints Pères, drawings and furniture illustrate Aldo Rossi’s production in the field of design. Objects that were to become icons, such as the Teatro series, his Carteggio secretaire and his Milano chair, but also key items created for projects and buildings that marked his career as a world famous architect, from the Il Palazzo Hotel in Fukuoka in Japan, to the Teatro Carlo Felice in Genoa, from the Bonnenfanten Museum in Maastricht in the Netherlands to the Teatro La Fenice in Venice (the wooden parts of which were reconstructed by Molteni&C). And enhancing the exhibition further, evidence of his architectural genius: a painted wooden model of the South Bronx Academy of Arts in New York made in 1991 and another of Berlin’s Pariserplatz dated 1995. An important loan from the Fondazione Rossi, set up by his heirs in 2005 to bring together, safeguard and popularize Aldo Rossi’s work, in all its rich complexity. A new spotlight on Aldo Rossi, who wrote in his scientific Autobiography: “About any project, as about any unfulfilled love affair, we could say: now it would be finer” (A. Rossi, Autobiografia scientifica, Nuova Pratiche Editrice, Milano 1999).