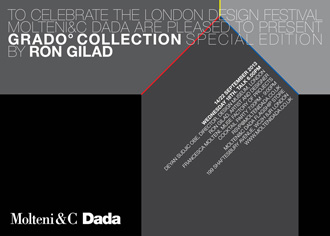 Art design and technology and their connection in Ron’s work and in the contemporary scenario Within the context of the 2013 London Design Festival, Molteni&C and Dada will celebrate an exclusive version of the Grado° Collection by Israeli artist and designer Ron Gilad, nominated “Designer of the Year” in 2013 by Wallpaper and Elle Decor magazines. Molteni&C and Dada’s Flagship Store in Shaftesbury Avenue will exhibit versions of the furniture specially designed for the 2013 Salone del Mobile in Milan. Furniture-sculptures that enrich the Grado° Collection with stunning new designs. The hanging, diagonal 45˚/libreria bookcase features various elements of the original shape of the small 45°/tavolino table. The installation also includes the oval Panna Cotta table, made of Grey Carnico marble, the 45°/specchiera mirror and the 45°/tavolo table. All collector’s items in special configurations and finishes signed by Ron Gilad. And then new colours for the blue 60°/consolle and red 35°/consolle. The design is an extension of the key concept of the Grado Collection. Geometrically rotated surfaces lead to corners bevelled to 45°, solved thanks to a metal joint and aluminium sections, coated with precious woods or lacquered with the primary colours of yellow, red and blue. “My partnership with Molteni&C”, says Ron Gilad, “has been very interesting because it has allowed me to work, for the first time, with an industrial approach. Initially I inquired about the history of the brand and its values, and I thought about how to exalt them. I concentrated on the basic forms and manipulated them, both conceptually and concretely. I succeeded by using the essential to exalt the concept of functionality”. 14-22 September 2013 Molteni&C Dada London Flagship Store 199 Shaftesbury Avenue WC2H 8JR, London T +44 (0) 20 7631 2345 info@moltenidada.co.uk www.moltenidada.co.uk